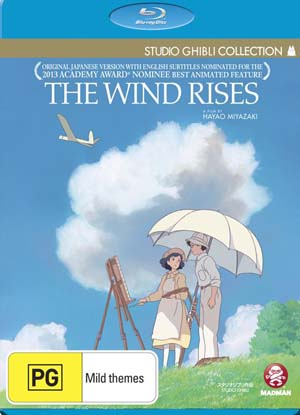 The Wind Rises is the new animated feature from Japan’s Studio Ghibli, and the last film from legendary director Hayao Miyazaki. It is everything you would expect it to be… and yet it manages to surprise.

Inspired by the life and work of aeroplane designer Jiro Horikoshi, the film is a lyrical mixture of fact and fiction, reality and fantasy. Although Jiro’s greatest achievement, the Mitsubishi A6M Zero, was an instrument of destruction used during WW2, the film doesn’t dwell on this. Rather, it focuses on the joy and majesty of flight, and the inspired, driven (obsessive?) pursuit of it. The moments where war is referred to, have a sense of sadness about them.

Dream sequences are an important part of the film, including those in which Jiro talks with his hero, the famous Italian aircraft designer Giovanni Battista Caproni. But it is the dream sequences in which Jiro imagines the workings and failings of his creations, that are particularly breathtaking.

Miyazaki’s films are always extraordinary and wide-ranging — going from epic (Nausicaä of the Valley of the Wind) to small scale (My Neighbour Totoro — see review), from violent (Princess Mononoke — see review) to gentle (Kiki’s Delivery Service), from mature and complex (Howl’s Moving Castle) to childlike (Ponyo). But they are all breathtakingly animated, beautifully written and wonderfully engaging. The Wind Rises is no exception.

It’s become difficult to review Miyazaki’s films because they are always so brilliant in every aspect, and one runs out of superlatives. So let me simply say — go watch it!

The Wind Rises is released on Blu-ray and DVD in Australian by Madman.

You Choose covers Festivals, promos and other speaking gigs