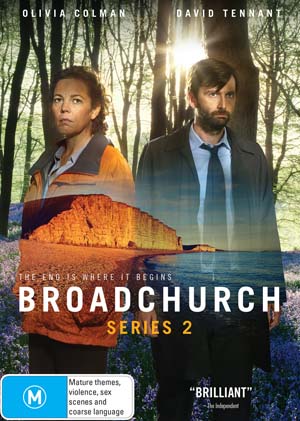 The second season of the British murder/mystery series, Broadchurch, is as riveting as the first. Stunning locations, beautiful cinematography and direction, intelligent writing and a superb cast, make this outstanding television viewing. There is so much attention to detail in every aspect of this production.

The first season (see review) was about the police investigation into the murder of an 11-year-old boy in the small seaside town of Broadchurch. This second season follows on from the first, combining two storylines — that of the trial of the killer; along with the resurgeance of an unsolved case that has dogged DI Alec Hardy.

This season is part mystery, part court-room drama and, as with the first season, a digging down under the veneer of small town life. We get to see how this town and its inhabitants are coping (or not coping) with the revelations of last season. And, of course, once the trial is over, they also have to deal with the fall-out of that… leading to an unexpected but very satisfying conclusion.

An underlying theme with this season, is the questioning of previously held convictions — particularly with regards to Detective Inspector Alec Hardy. It makes for tense, edge-of-your-seat viewing.

The ensemble cast are brilliant. Those returning from the first season, lead by David Tennant and Olivia Coleman as police detectives Alec Hardy and Ellie Miller, continue to build on their characters. And the new additions are just as great. In fact, I would go so far as saying that it is two of these additions — Charlotte Rampling and Marianne Jean-Baptiste as opposing lawyers Jocelyn Knight and Sharon Bishop — that steal the show.

There are a great bunch of extra features on this three-disc set, including a making-of doco and a couple of other behind-the-scenes featurettes. The individual interviews are a little repetitive to watch, as most of them have already been used in the docos. The deleted and extended scenes are a highlight. While some are scene-setting and have obviously been cut for time and flow; there are a few scenes which add to or change characterisation, motivation and situation. One scene in particular, which I wish had been left in the series, really hammers home the hypocrisy of defence lawyer Sharon Bishop. The other highlight is at the opposite end of the spectrum, with the unedited footage of David Tennant and Olivia Coleman doing station promos for the series. They look like they’re having a ball.

Broadchurch: Series 2 is released on DVD in Australia by Roadshow Entertainment.

DVD Review — Voyage to the Bottom of the Sea: The Complete First Season REAL Award Shortlist