DVD Review — Voyage to the Bottom of the Sea: The Complete First Season 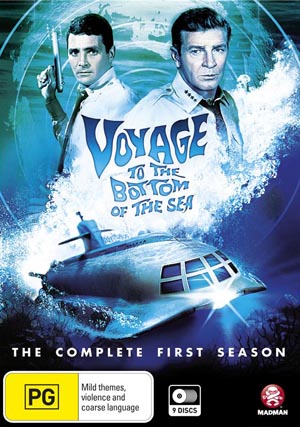 Voyage to the Bottom of the Sea is a well-produced, exciting near future (for its time), action/adventure series about the crew of an advanced submarine called Seaview. This first season of 32 episodes screened in black and white in 1964/65. Despite its age, it holds up very well. It’s tense, dramatic and, at times, quite gritty.

Film producer/director Irwin Allen turned his hand to television in 1964 to create Voyage to the Bottom of the Sea, the first of his successful shows which would include Land of the Giants (see review), Time Tunnel, Lost in Space and some non-genre shows. It is based on his feature film of the same name from 1961, allowing for the reuse of sets, costumes, models and effects shots.

The Seaview is a quasi-military, research vessel. It is not officially Navy and its crew is seconded from the Navy. The upshot is that it is sent on missions of a military and political nature, as well as those of a scientific nature. So this first season is blessed with quite an interesting variety of stories, covering everything from political cold war intrigue to bizarre sci-fi; from espionage thrillers to physiological drama. There’s even an odd Christmas episode. Adversaries include sea creatures, aliens, robots, foreign powers and a few James Bond-esque villains. It’s really interesting to note the similarities between this series and SeaQuest DSV (see review), which has obviously been heavily inspired by Voyage to the Bottom of the Sea.

Ricahrd Basehart plays Admiral Harriman Nelson with stoic earnestness, while David Hedison as Captain Lee Crane is engaging and believable. The two of them work very well together. There is an interesting line-up of guest cast, including Leslie Nealson (future star of The Naked Gun and other comedy films), Werner Klemperer (Colonel Wilhelm Klink from Hogan’s Heroes) and future movie star Robert Duvall.

The series has a wonderful look and feel, which maintains consistency over the 32 first season episodes. The effects are generally good, particularly the model work. There are a few instances of visible wires and repeated footage, but these do not really detract. The most common problem is surface visibility in numerous underwater shots, which are supposed to be deep in the ocean. But I suspect this would not have been noticeable on the small CRT television sets on which people would have originally watched the series.

I can’t help but compare this series to the first season of Irwin Allen’s later series, Land of the Giants, which I also recently watched (see review). Voyage to the Bottom of the Sea, is much faster paced and more exciting. Unlike Land of the Giants, it doesn’t dwell on the effects, rather using them to get on with the story. The acting style is also more convincing and the writing more consistent. All up, it is a far superior series.

The DVD release is brilliant, with high quality remastered episodes. It’s a nine-disc set with some great extras, including a contemporary promo for the series and a new interview with David Hedison. Highlights include the unaired pilot and the home movie footage.

Watching the un-aired pilot is interesting. It is the same as the first episode, but in colour. I actually prefer the black and white version, which is more atmospheric and better at integrating the special effects. The pilot appears almost too brightly coloured.

There is a large amount of silent home movie footage from the set of the pilot episode. It is interesting, but suffers a little from being silent and somewhat repetitive. The addition of narration would have gone a long way towards solving this. Nevertheless there are some golden behind-the-scenes moments — including stunt work; Irwin Allen directing from atop a studio ladder, fake snow wafting through the air around him; and Allen demonstrating to the actors how to properly throw themselves about the set when the Seaview is rocked by an explosion.

All up this is excellent stuff. Great for television nostalgia buffs… but also a good example of quality television from the 1960s.

Voyage to the Bottom of the Sea: The Complete First Season in released on DVD in Australia by Madman.